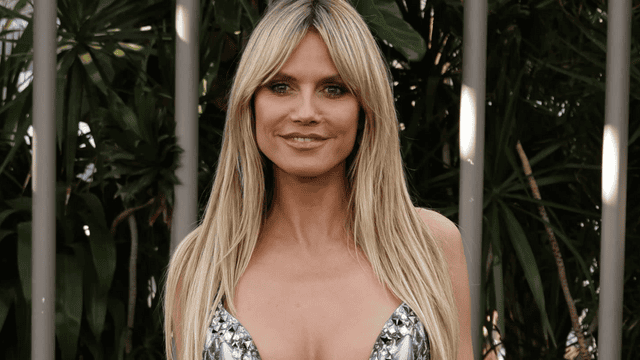 Hot Girl Summer 2022 isn’t done yet. Even though Heidi Klum is having the time of her life while on vacation in a tropical location, she still makes time to upload some jaw-dropping bikini images to Instagram.

The supermodel uploaded a picture of herself to her Instagram account a few days ago, and in it, she was just wearing a white bikini bottom.

She posed flirtatiously against a railing while looking gorgeous, with her head tilted over her shoulder with the backdrop of the ocean and palm trees in the distance.

Heidi Klum windblown and sun-kissed blonde hair partially obscured her face. As Heidi Klum continues to document her trip to the tropics with a series of bikini-clad selfies and videos that she uploads to social media, it is clear that she is having a great time.

The supermodel uploaded a few clips from her carefree holiday to Instagram, where she showed off her toned body and displayed more of her huge swimwear collection.

One carefree clip depicts Klum knee-deep in the sand on a beach, flipping her hair and joyfully smiling in front of a picturesque blue ocean backdrop as fluffy white clouds glide across the bright, sunny sky.

The vibes can be felt through the screen, as one carefree clip depicts Klum knee-deep in the sand on a beach. “It’s Friday, she captioned the image while wearing a colorful high-waist cheeky bikini with the top worn straps-off-shoulder.

ALSO, CHECK: Ne-Yo’s Wife Files for Divorce, Alleging That He Has a Child With Another Woman!

She was also holding a drink in her hand. The 49-year-old celebrity has been on holiday in St. Barth’s with her husband Tom Kaulitz as they have been celebrating their third wedding anniversary there.

And she hasn’t been bashful about taking some of the things they saw and did on the trip either. One video depicts the happy couple running into the ocean together while holding hands, and another video depicts a loving moment between the couple dancing and embracing one another poolside while smooching.

As long as it is you and I feeling like the luckiest person in the world,” Klum affectionately captioned the clip. The TV anchor danced around in a string bikini with an animal design in black and white while Gene Kelly’s “Good Morning” played in the background in another short video that was uploaded to her account, which has more than 9 million followers.

READ MORE: Christina Ricci Claims Johnny Depp Taught What It Means to Be Gay to Her When She Was 9!

She wore a matching cap to go with her outfit. She added a succession of cheerful emojis to the video’s caption, including a unicorn, butterfly, and sun, among others.

Throughout the course of the summer, the model who formerly worked for Victoria’s Secret has been posting scantily dressed pictures from her vacation.

MUST CHECK: Kelly Ripa and Mark Talk Up Their Daughter Lola’s Debut Single Which is Coming Out Soon!

On one occasion, she gave a shout-out to Megan Thee Stallion by captioning a topless picture with the phrase “hot chick summer.”

Jessica Alba’s Net Worth: What is Her Earning at the Honest Company?

Gigi Hadid Gives Hints About When Her First Clothing Line Will Come Out!

Taylor Swift Responds to ‘shake It Off’ Lawsuit: the Lyrics Were Entirely…