Might it be? One day after Kim Kardashian posted photos of herself and Pete Davidson without their shirts on, fans noticed that Davidson had a “Jasmine and Aladdin” tattoo on his neck.

This was supposedly done in honour of the Saturday Night Live sketch where the two met.

The tattoo is written in a simple, all-lowercase cursive font across the 28-year-old comedian’s left collar bone.

In the SNL sketch from last October, Aladdin and Jasmine, played by Davidson and Kardashian, sit on a flying carpet and talk about how Aladdin is afraid he won’t be able to handle being intimate with Jasmine.

Check out: The Kardashians Season 2 Release Date | Here Is Everything About This Season 2

“As we get closer, I’m just a little worried that I can’t handle you physically,” Davidson’s Aladdin said. “I’m afraid I might not get all the way in if I try to go in.”

Jasmine Kardashian tried to make him feel better by holding his hand and telling him, “I’m sure you’re more than enough man for me.” At the end of the sketch, the couple had what turned out to be their first kiss.

Davidson first did something to remember the sketch that started it all on Valentine’s Day. He asked the SNL costume department for a few favours.

“He gave me the rug, the whole outfits, and the little Genie lamp for Valentine’s Day. So the rug is mine, “Kim said on Jimmy Kimmel Live. Now, the most recent tattoo adds to the collection of things about Aladdin and Jasmine. 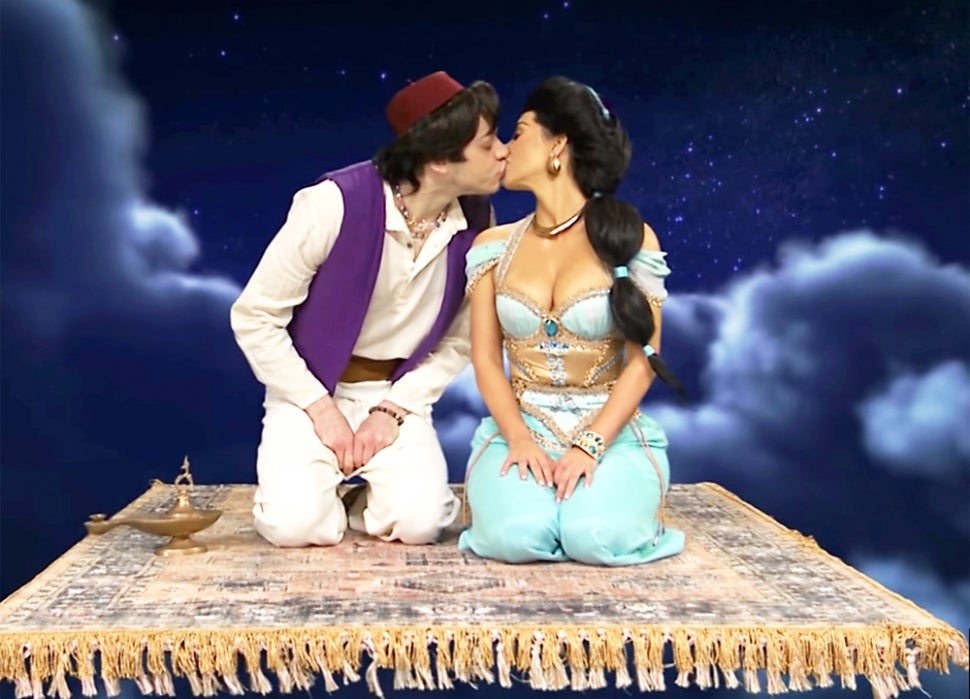 This is not the first time Davidson has done something to show how close he is to Kardashian. Even though he has other tattoos about Kim, she told him in March that her favourite is a small part of his collar bone that says “My girl is a lawyer.”

Kardashian passed the baby bar exam in December, and in April she confirmed that Davidson has her name branded on his chest.

She told Ellen DeGeneres, “He said, ‘I want something that’s there that I can’t get rid of.'” “Because he is getting rid of the tattoos on his arms and neck. He says, “I don’t want to be able to hide it or get rid of it. I just want it to stay on me like a scar.'”

Read also: Emily Ratajkowski Shared A Photo On Instagram Of Herself Wearing A Corset!

Urfi Javed New Dress – Razor Blade and Get Trolled by Her Fans !